Client was a nine-year-old male at time of evaluation; diagnosed with Autism at age three. Client had been receiving ABA therapy from this clinician for one year. Client has been diagnosed in the past with mild Mental Retardation (MR) and expressive speech delays. Additionally, he has difficulty with gross and fine motor skills. Since age five, client has received one hour of speech and one hour of OT per week at school.

Other Interventions Used
Applied Behavior Analysis – The Catalyst Data Collection Platform program was utilized to track behaviors. Behaviors were tracked bi-monthly over 10 trials per goal per one hour session. Behaviors were marked as independent or prompted with type of prompt used being designated. A baseline was gathered post six months of ABA treatment. These trials were completed while goal was rapport building and equipment familiarity only.

Verbal, Physical, Gesture, Positional, and Demonstration prompts were utilized and documented for prompted behaviors. Independent behavior goals were then plotted on a graph as to percentage of successful trials per data tracking session. Reciprocal and Expressive Language skills were assessed including eye contact upon his name being called out, sharing of object for a minimum of one minute when asked to do so, following of direct commands by others within 30 seconds of request, use of simple statements to express needs/wants, and answering yes/no questions appropriately. Behaviors that were also tracked included screaming and self-harm.

Summary of Changes
Client was assessed one month post completion of the iLs protocol. Initial assessments were completed by his parents and teachers along with home, school and clinic observations toward completion of goals. Data was collected bi-monthly during the treatment stage using the iPad app Catalyst Data Collection Platform. The data was utilized to determine amount of progress toward goals. The final assessment utilized the Vineland Teacher Report form and the BASC-2 completed by his parents and his teachers along with a post observation utilizing data tracking.

Client’s teacher was initially upset by the ABA counseling sessions taking place three times a week in the morning resulting in the client coming to school 45 minutes late. Two weeks after initiation of the new treatment combination of iLs simultaneously with ABA therapy, the teacher stated that she wished the therapy was every day. She stated that on the days he started with ABA/iLs therapy, he was less aggressive, followed directions more, required less prompts and was on task more often.

Within the first month, client’s parents noticed a decrease in self-injurious behaviors, a decrease in screaming, improvements in sleep and more attempts at vocalizing needs.

Clinician noticed improved mood, decreased anxiety, sustained attention during sessions, improvement in gross motor skills, and decrease in aggression to self. A baseline was collected and then treatment data collection began at week two of ABA/iLs treatment, iLs session #5. Data was collected every two weeks. 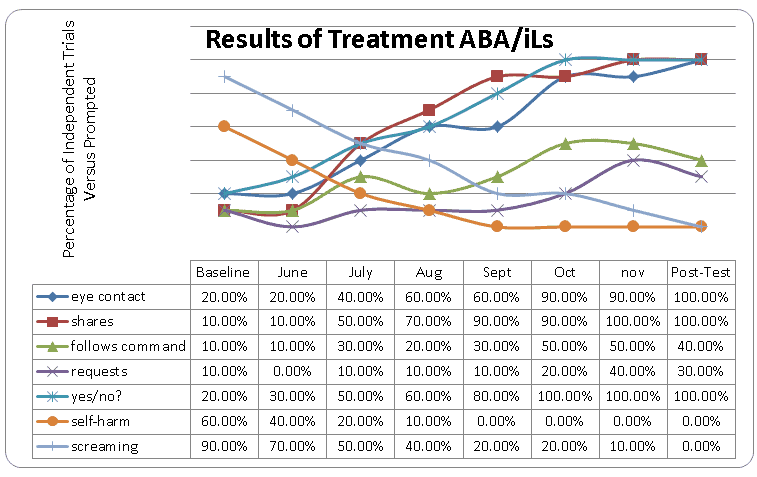 Recommendations
The combining of iLs with ABA therapy suggests an increase in skill attainment over ABA therapy alone. iLs in combination with other therapies is a powerful combination in that it works on a bottom-up principle rather than top-down. iLs utilizes specifically treated music (and specially engineered auditory equipment) to engage the brain in the process of learning while reducing sensory and mood challenges. This sensory input allows the child to be grounded, present and available for the benefits of ABA therapies. It is recommended that more studies using this treatment combination be completed using an ABAB design in order to better document the increased therapeutic benefit of the use of iLs as a tool during ABA therapy.

In addition, it is recommended that the recently developed iLs Pillow be utilized before the ABA/iLs therapy is initiated. The iLs Pillow was not available at the time of the treatment provided during this case; however, it has become a standard protocol in this clinic. The protocol involves the utilization of this device at home when the client goes to bed. The iLs Pillow delivers music through vibration and serves to help those with auditory hyper-sensitivity acclimate to auditory input prior to beginning an iLs program. A secondary benefit is that it assists clients with falling and staying asleep, which of course has cognitive, emotional and social benefits.

Comments by Ron Minson, MD, iLs Clinical Director
The impressive results from a combined approach of ABA therapy and iLs speak for themselves. One can only imagine the relief to the parents, family and teachers that his screaming went from 90% of the time to 0%!

The clinician rightly emphasizes the importance of sub-cortical processing (the “bottom-up” effect of iLs) to support learning and cognitive function. I have often emphasized the importance of establishing a good sub-cortical foundation before addressing higher learning and conscious control of behaviors. However, this case beautifully illustrates that a multi-sensory sub-cortical approach may be done simultaneously with higher order learning and behavior therapies. I can see that doing so may further accelerate the speed at which learning and behavioral control is established as these approaches work hand-in-hand to improve brain function at all levels.

An important footnote: Taking a child out of school for an effective therapy is not a threat to their learning. This case strongly points out that fact. Often a child is not benefiting from the instructions in the classroom, yet teachers fret unnecessarily over losing class time. What is the value of leaving a child in the class where they will experience more frustration, embarrassment and emotional pain because they can’t perform up to expectations?