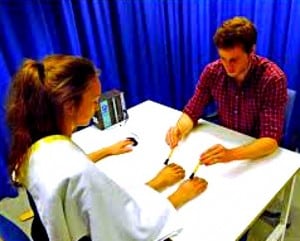 Illusions that play tricks on the senses may offer insight into the brain function of people with autism spectrum disorder (ASD). Researchers from Monash University and Deakin University in Australia tested how people with ASD react to the ‘rubber-hand’ illusion, which tricks subjects into believing that a fake hand is their own. They found that people with ASD are less susceptible to some of the effects of the illusion. This suggests that people with ASD may make movement decisions without the same level of contextual information that people without ASD would use. The findings may lead to a better understanding of how ASD affects the brain.

The subjects’ hand movements were disrupted by the experience of the illusion. The subjects most affected by the rubber-hand illusion were those with the lowest levels of autism-related traits. People with ASD fell for the illusion, but they were more likely to resist the illusion’s effects when they reached out for the object. This suggests that autistic brains may not make decisions based on background information and context in the same way that non-autistic brains do.

The findings suggest yet another way that the brains of people with ASD differ in their interactions with their environments. The study also corroborates other work indicating that people with ASD have impaired predictive abilities.

Colin Palmer, PhD student from Monash University’s School of Philosophical, Historical and International Studies, who was involved with the study says of the findings, “The study suggests that individuals may differ in how their brains draw upon contextual information when perceiving and interacting with the world. This could contribute to sensory and movement difficulties, which are commonly experienced in autism.”

This research is published in the Proceedings of the Royal Society B.