Rosemary, a pre-kindergarten student, had difficulties with phonemic awareness, including difficulty pronouncing words. She also spoke quickly and in a soft tone, making her communication difficult to understand. Rosemary had challenges closing fasteners on her clothes and utilizing scissors. Rosemary’s parents brought her to Brain Harmony for an initial Occupational Therapy evaluation due to their concerns with her speech and fine motor tasks.

Pre- and post-testing measures were taken at school using the Florida Voluntary Prekindergarten (VPK) Assessment and the Discovery Education Assessment, which compares the child’s progress in reading and math to her peers at her school and her peers throughout the school district.

iLs (now the Focus System) was used in conjunction with Occupational Therapy and Speech Therapy, and after six months, the client showed gains in performance including improved reading, mathematics, fine motor coordination, and self-care.

The goals for therapy included: For the Print Knowledge measure, Rosemary started the school year below expectations. Over the course of therapy and iLs, she continued to expand her knowledge and ability to recognize the difference between letters and words, the sounds letters make, and upper and lowercase letter names. By the end of the school year, Rosemary scored the highest possible score of 12, which placed Rosemary in the “exceeding expectations” category.

For the measure of Phonological Awareness, Rosemary started the year below expectations. She continued to expand her knowledge and her ability to manipulate different sounds in a word. The maximum score for this measure is 15, her score of eight places Rosemary in the “meeting expectations” category. For the measure in Mathematics, Rosemary started the year below expectations. She continued expand her knowledge in the areas of counting skills, numerical relations skills, and arithmetic reasoning skills. The maximum score for this measure is 18. Her score of 15 places Rosemary in the “exceeding expectations” category. 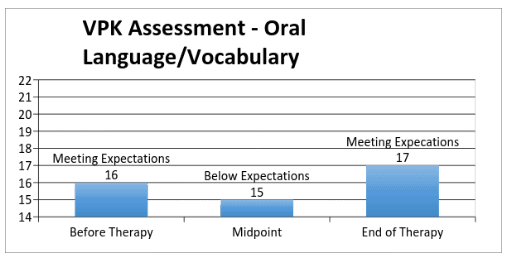 For the measure of Oral Language/Vocabulary, Rosemary started the year below expectations. She continued to expand her knowledge in the ability to express herself in words, understand language that is heard and her knowledge of age-appropriate words and their meanings. The maximum score for this measure is 22. Her score of 17 places Rosemary in the “meeting expectations” category.

The Discovery Education Assessment tracks a student’s progress in Reading and Math at the beginning to the end of the year in comparison to peers at her school and peers throughout the entire school district.

Rosemary’s mother came to us after her daughter’s VPK teacher gloomily told her that she didn’t expect Rosemary to pass kindergarten. She couldn’t remember names and sounds of letters, and her speech was limited and hard to understand, with a large percentage of speech in “baby talk.” She had big blue eyes like a window into her heart. Rosemary knew something wasn’t going right for her at school, and her concern was manifesting with anxiety and passivity. Her mother and I knew how fragile she was at this juncture of development, so we chose the home-rental program of iLs, so we could give her child-organizing input on a daily basis instead of waiting for weekly visits with OT. The family’s listening diligence paid off, and she became a leader in her class and was enthusiastically promoted to the next grade with above mastery in all areas, including phonetics, writing and math. The joy of learning can be seen in her blue eyes, thanks to iLs and OT.

Overall, Rosemary made significant progress as shown by academic testing.

Rosemary was discharged from occupational therapy because her family moved out of the area; however, her parents were pleased with the progress that iLs in combination with therapy had on Rosemary.